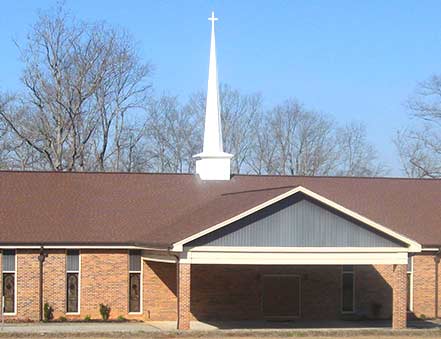 In 1876 our founders organized their brush arbors into a church under a tree in the yard of Mr. and Mrs. Bub Walker. Rev. Gabriel Poole, pastor of Springfield Baptist Church in Greenville, South Carolina, assisted by Rev. Jeff Young and thirty (30) members organized the church. The church group was named Rocky Mount Missionary Baptist Church and Rev. A. Fuller became pastor. This minister of God guided the people in Christian leadership and advanced in many ways. Under his administration, two acres of land were purchased on White Horse and Motor Boat Club Roads to build an edifice.

The pastors that served after Rev. A. Fuller were Rev. J.V. Jones, Rev. Sanford Sullivan, and Rev. Harris; however history did not record their accomplishments or their tenure with the church. In 1891 the old edifice of Berea White Baptist Church was given to the Rocky Mount Baptist Church. Rev. John Washington was pastor at this time. The building was rolled down the road to become Rocky Mount Missionary Baptist Church's first building. The structure was reputedly made from hewn framework with homemade boards for roofing. The ceiling was made of eight to ten inch hand dressed planks. The dimension of the building was about thirty or forty feet held together with wooden pegs. Planks held together with wooden pegs also served as the pews. Rev. J. Washington, with the aid of members, repaired this old structure and this gave the black people a building for worship.

Succeeding Rev. Washington was Rev. C.C. Taylor who made plans to build a new edifice; however his plans went unfinished and he resigned with two years of service. Rev. W.M. Morgan took up the pastorate and succeeded in paying off the debt. When he left, Rev. Harrison Watkins came to the call of the founders with willing hands and took on the task of building our first edifice. In 1908, Rocky Mount Baptist Church dedicated the building unto God with joy and thanksgiving.

In the early thirties Rev. J.O. Allen became pastor. During his two or more years with the church, he succeeded in redesigning the structure and completely repaired the edifice. In 1934, Rev. T.B. Butler became pastor of the church. He ministered faithfully for the next ten years. Rev. Butler helped the young people purchase our first piano. A Young People's Choir was formed and his daughter, Miss Mettie Butler, played gospel music for the choir.

In 1944, Rev. W.A. Harrison was elected pastor. His accomplishments span out more than twenty years. Services were held every first and third Sunday. The first Vacation Bible School was held. The suggestion of having dinner on the Sunday before thanksgiving was made and it would later become a part of Rocky Mount's traditions. Other accomplishments include: establishing Bible Study, Women's Day, continuing gospel music, complete renovation of the edifice which included addition of indoor baptismal pool, carpeted floors, gas heaters to replace coal stoves, indoor restrooms, addition of a Communion table and a pulpit set. The BTU was reorganized and encouraged to purchase our first electric organ. Called to pastor St. Matthew Baptist Church, Rev. Harrison resigned from Rocky Mount.

In 1966, Rev. James W. Johnson accepted the job as pastor and served seven years. Improvements during his pastorate included new pews and pulpit furniture, the panel in back of the pulpit and choir loft, painting of the entire church, and a central heating and air conditioning system. We also acquired new hymnals, had printed church bulletins, started youth day, and reorganized the trustee board.

In February, 1973, Rev. Otis O. Pickett, Sr., was elected pastor. The current building that houses Rocky Mount Missionary Baptist Church was built under his leadership. Members recalled how they marched from the old church to the new church.

In 1989, Rev. Dr. J. W. Henderson accepted the job as pastor. The early morning (8:00) service was started; the 4th Sunday youth in charge of service was implemented; Rev. Louvenia Robinson became Rocky Mount's associate pastor; the sanctuary was remodeled with new carpet, lights, and padded pews being added; a new sound system was installed; a new organ and a baby grand piano were purchased; stained glass windows were installed all over the church; a church library was started; a tutorial program was started; copiers were purchased; a church van was purchased; the picnic shelter was built; and the Mass Choir was organized. We also had our mortgage burning and our cornerstone was laid. Under Dr. Henderson's tenure, Mr. Kenneth Rosemond, along with Mrs. Doris Robinson, wanted the old church designated as a historical site in South Carolina. Mr. Rosemond had started the process before the old church burned.

With Dr. Henderson's departure, Rocky Mount Missionary Baptist Church got its first interim pastor, Dr. F.R. Giles in 2006. He restored some of the church's hymn books; the library was moved and a women's lounge was created; a storage building was purchased and the kitchen was redone.

The search for our current pastor ended in June, 2007 when Pastor LaVelle McCray was officially elected as our pastor. Young, energetic, and always challenging, he possesses the credentials necessary to work in the Christian field as well as in the business and civic fields. He is active in the local congress, having served as Dean and currently serving as Vice president of the Enoree River Congress of Christian Education. He brought a refreshing atmosphere to Rocky Mount. Under his leadership we have created an acronym for the church ( referred to as the "ROCK" = Relationships, Obedience, Charity, Knowledge); purchased the land next door; installed bulletin boards in all the classrooms, the social hall and the hallway; acquired a more accountable financial system; installed a screen and projector in the sanctuary; established a leadership council and a praise team. We have established new ministries such as Pastor's Care, Couples, Singles, and Intercessory Prayer, just to name a few.